A Baseball Enthusiast’s Review of the Baum Bat

The Baum Bat is a baseball bat made from wood composite material.  Baum states that 20 years of extensive research and aerospace engineering went into the making of their bat. They claim on their website that their bat is 400 times stronger than wood and nearly indestructible.

I have owned a Baum bat for more than two years, so I can offer an in depth review of how it’s performed for me.

Great pop! Incredibly durable and good balance through the swing.

Balls jump off of the bat well. Nice sweet spot.

Good overall weight balance with the bat during swings. I own a Rawlings C271, too, and that one is lighter and easier for me to get around on fastballs.

I’ve been hitting with my Baum bat at least every other week for the last two years (off the tee or soft toss).  I’ve also used it on several occasions competitively (lob and fast pitch) and there are no signs of the bat’s integrity being weak in any way. 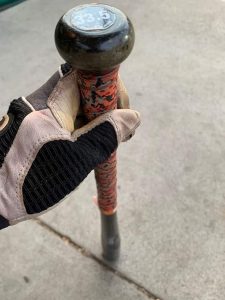 Personal Review of the Baum Bat

I’ll share my personal review of the Baum bat here.  But for you to understand my perspective, it might help to hear a little bit more of my background with baseball.

I may be pretty far from being your typical baseball head. I grew up playing a strike-you-out style of home run derby with my friends, crushing tennis balls with an Easton aluminum bat. Why we chose to pair those two things were out of convenience and consideration of our neighbors.

Step outside and play. Don’t break any windows in the process.

The best part for us, though, was that feeling of a fresh new tennis ball jumping off the bat of our ridiculously lightweight 30” 21-oz aluminum bat. That sensation has lived with us like a vivid and nostalgic memory. 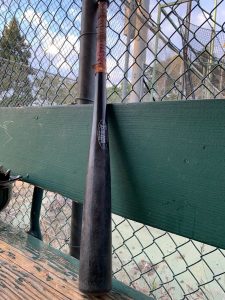 Decades later, those feels came back with the swing of the Baum Bat. And no, I wasn’t crushing fresh tennis balls. They were legit hardballs.

While there is a process of breaking in the bat, a friend of mine who played minor league ball had claimed the wood composite material would be plug-and-play. Sure enough, he proved that to me by launching deep balls one after another.

When it was my turn, I felt that childhood joy coming back. After hitting some laser-beam line drives and deep balls, the Baum Bat made me feel like a wannabe Giancarlo Stanton (I really wish I had someone tracking my improved exit velo!)

Next up was a home run derby reunion with my childhood friend. By then, I had been going out weekly and had properly broken in my Baum Bat per their recommendation. So we took turns lobbing to each other.

It was like we were instantly transported back to our childhood derby days, hitting hardballs this time, but enjoying that fresh tennis ball jump-off-the-bat nostalgia. We were loving the pop of the bat, and as we ramped up the pitching speed to each other, the Baum Bat’s nice balanced weight distribution helped us keep up with each other’s heaters—a whopping range of around 50mph and 60mph, respectively. 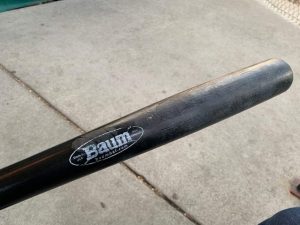 For your important consideration, we are middle-aged men now. And our highest level of ball was Bench Mob-status on our high school team. Now equipped with my Baum Bat, I look forward to getting together with my childhood friend as often as we can and for as long as we can, to continue our tradition of simply going out and hitting bombs.

I have a renewed passion and joy for hitting balls as one of my regular fitness activities. I also have a new personal goal of hitting the ball further.  Like I said earlier, I am not your typical baseball head. I didn’t play travel ball nor am I a parent or coach who is heavily involved with youth league play. I am a late-blooming, middle-aged enthusiast trying to resurrect every bit of baseball skills that I’d acquired, and develop new ones. Another important note: I didn’t mention the few and far between outings of hitting cheap (quality) baseballs with friends and fam using our over-extended, pop-long-gone aluminum bats. And a few rec softball leagues using a lightweight cheapo aluminum bat. These things prompted my eventual desire to switch to wood.

No Retirement in Sight

I’ve recently gotten back on the diamond again, playing in an adult rec hardball league. So far I’ve been making good contact with the Baum Bat and I’ve also watched other guys’ bats break on them.

I am also really happy to have reprised the ole strike-you-out-style home run derby with my nephew. For the purposes of this review, I must say that he has hit some far shots off of my splitter. And with both of us trying to strike each other out, there’s also relief with the Baum Bat still holding up after the foul balls and jammed hits that could have spelled the end of any all-wood bat (I will get to this point next).

So, yep, the Baum Bat and I will always be looking to go the distance with no retirement in sight.

Problem with Other Wood Bats

I felt compelled to write a review of the Baum Bat because it’s a purchase that I have felt great about. When I had done my research, I looked at the Baum website and around Google. After reading review after review  I learned how inevitable it would be to have to go through wood bats often.

I wish I had spent more time researching before I purchased my first and second wood bat (both Marucci RBI bats), prior to the Baum Bat. For that bat purchase, I wanted to try out Marucci for my first time and it felt good in-store.

After using and breaking my Marucci bats, what personally shocked me was that they broke on lob pitching. I really did like the feel and price of them ($59.99 for that Marucci RBI bat). After my first Marucci bat broke, I actually felt somewhat relieved with my comparatively lower-priced Marucci purchase decision since I didn’t lose out on a lot of money from buying a more higher-quality, higher-priced bat that could have also broken at some earlier point than I was expecting.

But after my second Marucci bat broke, I figured that I might have to spend a little more money and that is what became my ultimate rationale to give the Baum Bat a try. I mean, for me, I knew I would be wanting to go out and hit on a regular basis and prepare for league play, so why not try out a wood composite bat with such strong claims of durability?

Additionally, like the Baum website mentions, the bat is BBCOR certified, so it seems good-to-go for all or most non-MLB leagues.

After over two years since my Baum Bat purchase, I have gone out weekly to hit via soft toss or with a tee, had some home run derby outings, and recently joined an adult hardball league.  I couldn’t be a happier man.  Gone are the days of losing pop from an aluminum bat over less time and also the apprehension of having to regularly buy a wood bat that could break not long after its purchase. Give Baum Bat a try and enjoy!

"Chow" has been a native Californian all his life. A true scout by nature, he has explored countless miles by car to try out and enjoy all kinds of food. This includes cuisines from over 80 countries (not including regional cuisines within). He's also passionate about baseball, football and travel.