The Perfect Foodie Weekend in L.A.

If you’re considering going to Los Angeles for a weekend and need ideas for where to eat, then you’re facing the challenge of choosing just a handful of places from an enormous selection of great places to eat.

My friend and I recently traveled to L.A. from Northern California for a weekend, and we were faced with that exact dilemma.  We’re both foodies and we each had a long list of ideas for where to eat.

We eventually narrowed it down and ended up having an awesome weekend that tickled our tastebuds.

We drove down after work on Friday, and we arrived by 11pm.  We decided to rest up for a big Saturday.

Our hotel was in the Silver Lake area of L.A. 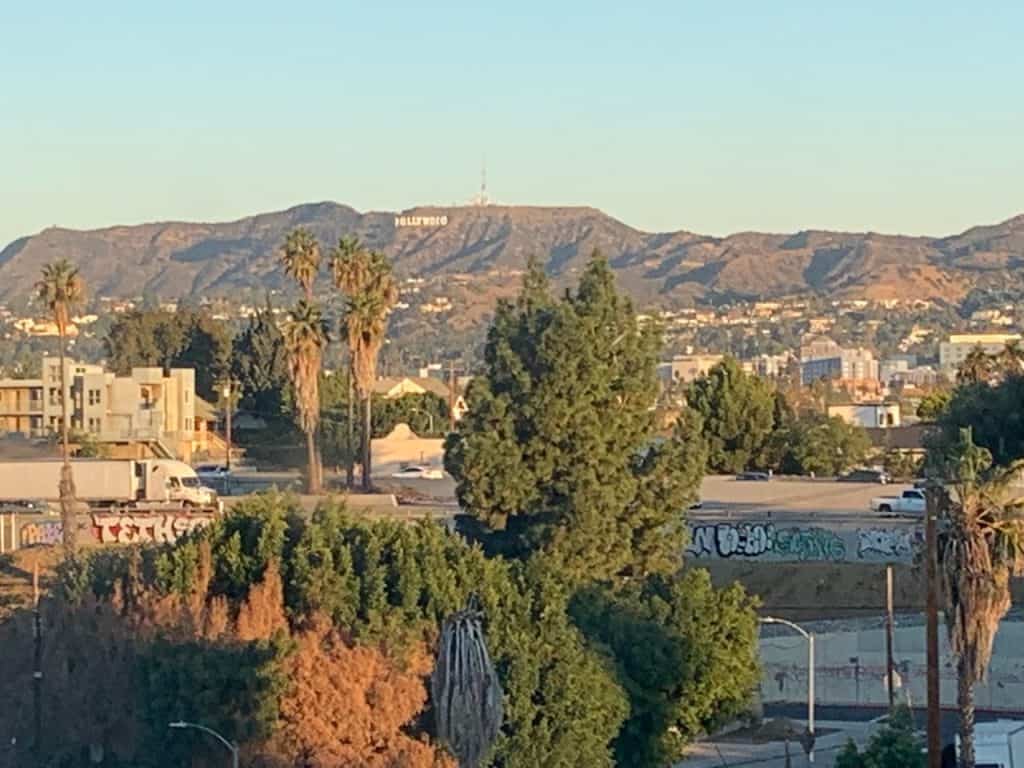 It didn’t have the best amenities, but the view of the Hollywood sign from our room was really fun.

The first place we headed on Saturday was Courage Bagels on Virgil Avenue.  The line was super long and took an hour to get through, but to me it was very well worth it. 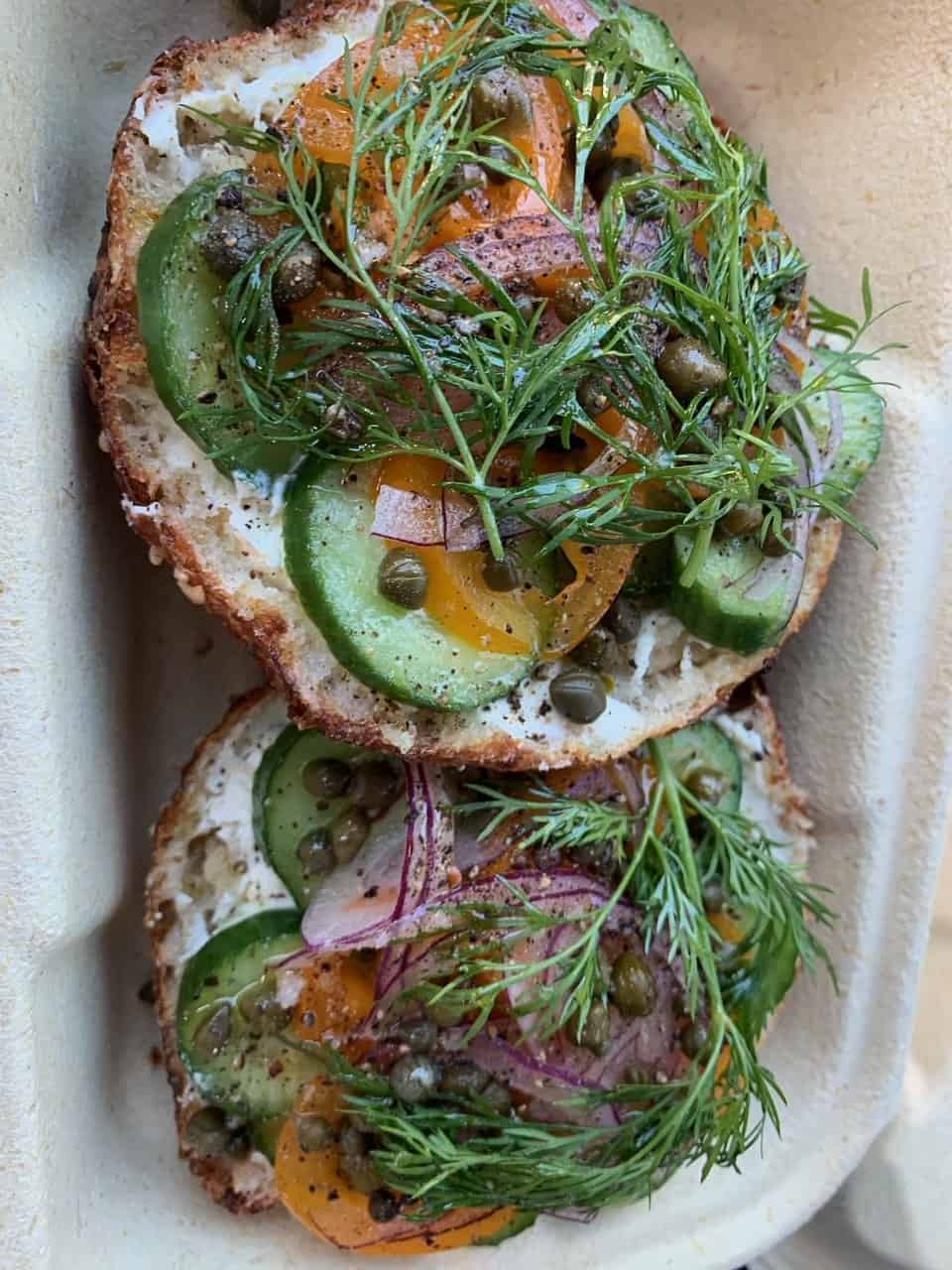 This bagel was called “Dragged Through the Garden”.  It was one of those rare types of food that is both healthy and delicious.

We also tried the salmon bagel and it was great.  Courage Bagels is known for using burnt sesame bagels (Montreal style).  I personally was a little leery about the burnt bagels because I don’t tend to enjoy things that are overly crispy, but these were wonderful.  I would go wait in that line again in a heartbeat.

After that, we decided to do a Paramount Studio tour.  It was near the bagel place. 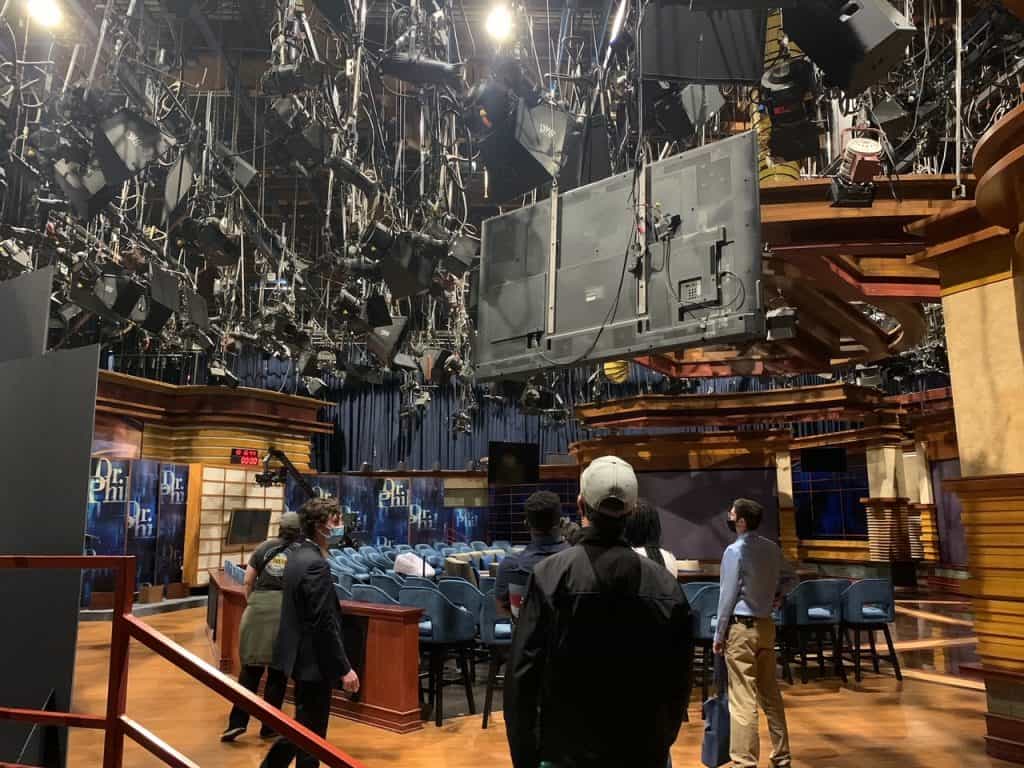 We got to check out the set of the Dr. Phil show.  I’ve never watched the show, but I’m familiar with it.  I could really appreciate how much effort goes into putting out a show like that.  There are almost 500 different lights overhead that are used every episode.

And for any of you who have watched a lot of Seinfeld, you may be familiar with the marble rye episode. 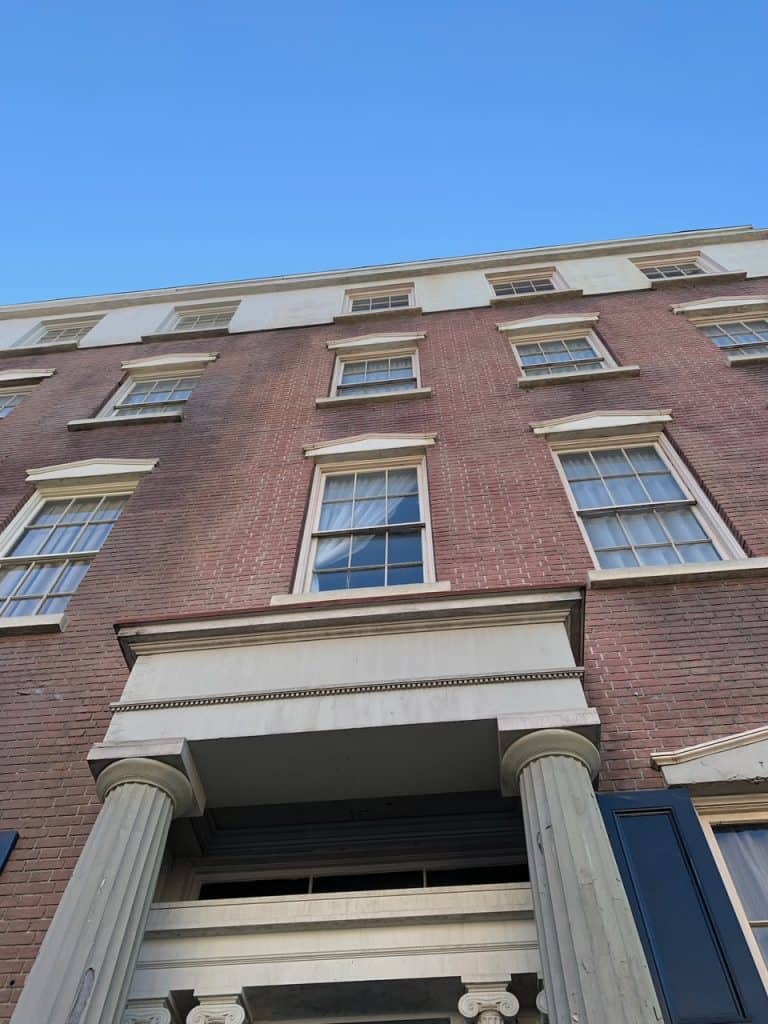 This is the building where Jerry and Kramer were trying to throw the bread up to George in the third-story window.  It was awe-inspiring for me to be there.  I felt like I was in another world.

After the tour, we headed over to Langer’s Deli.  It’s right next to MacArthur Park.  There was also a line there, but it only lasted about 15 minutes.  And they moved lickety-split in there.  Once we placed our order, it came out within five minutes. 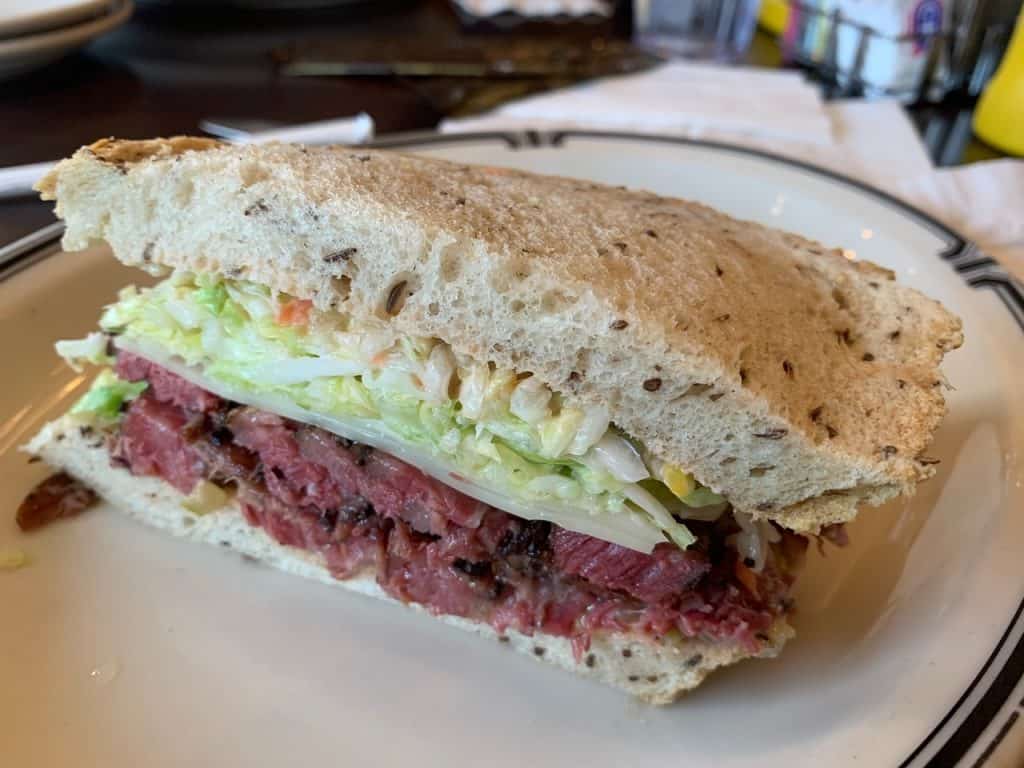 We ordered their famous #19 pastrami sandwich.  The meat was so tender and juicy.

We also got some latkas, and I think they were the best I’ve ever tasted.  Also the most expensive!  I smothered them in apple sauce and it was glorious.

We meandered around L.A. to burn off some food, and then we made our way to Father’s Office. 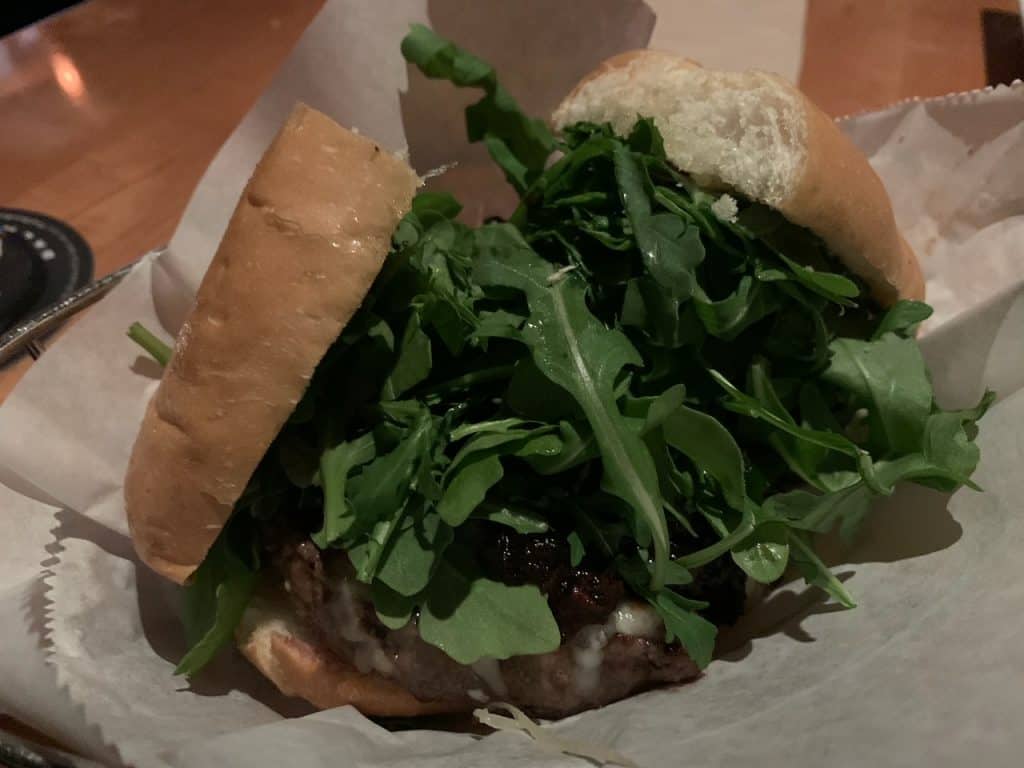 Their burgers are famous, and after trying one, I can understand why.  It was so juicy and delicious.  It came with blue cheese, which isn’t my favorite, but I’m still thinking about this burger weeks later.

We also tried their salt and vinegar tater tots and their beet salad.  The aioli that came with the tater tots was awesome.

After we digested that meal, we headed over to Koreatown for a treat.  We got some mango bingsoo and cruised around the neighborhood at night.  It was a great way to end the day.

We knew we’d have to head home that afternoon and would have limited time that day.

We started by going to Smorgusburg.  There were tons and tons of food vendors there. 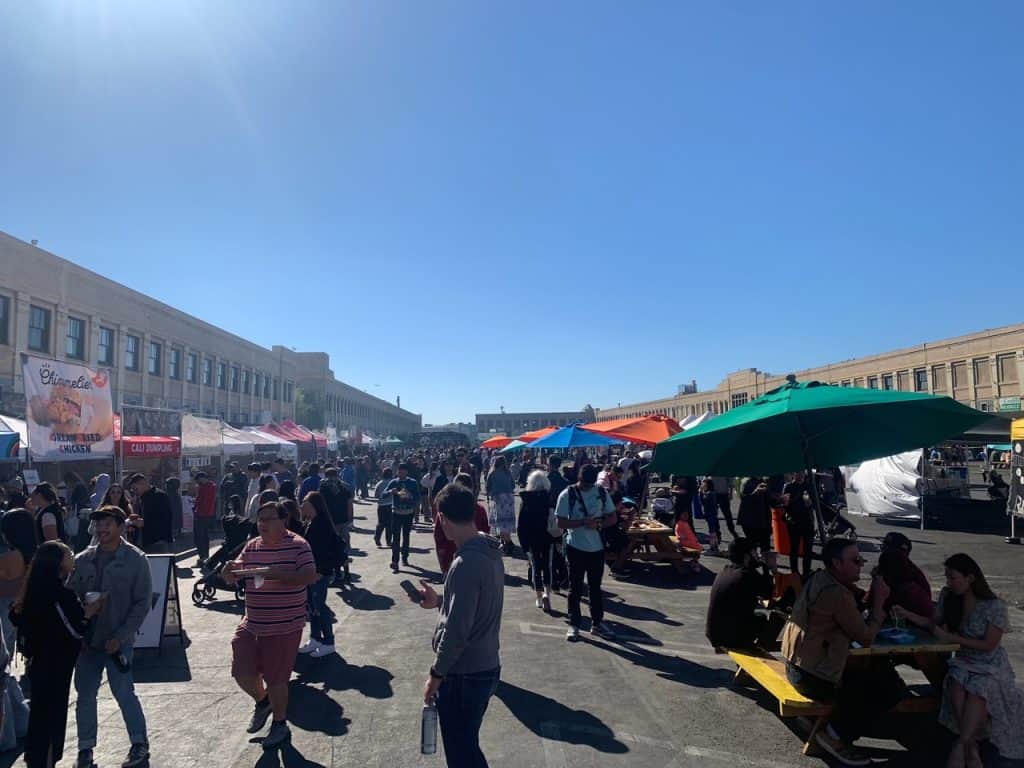 And so many creative dishes were showing up, too.  It wasn’t just like hot dogs and hamburgers.  It was Venezuelan hot dogs (which were delicious by the way) and Peruvian tacos.  It was mango sticky rice cookies.  There were a ton of surprises and each tent came with fun food surprises.

I enjoyed the experience overall, but for me, it was a bit overwhelming.  I think when I’m faced with that number of choices at one time, it’s like information overload.  And I inevitably feel like I wish I had tried other stuff too, but alas, my belly is not big enough to fit it all in.

After conquering Smorgusburg, we moved on to Little Toyko.  There is this one walkway area between streets that’s really fun and feels like you’re in a bit of a different world.  There were lots of people and plenty of fun food options. 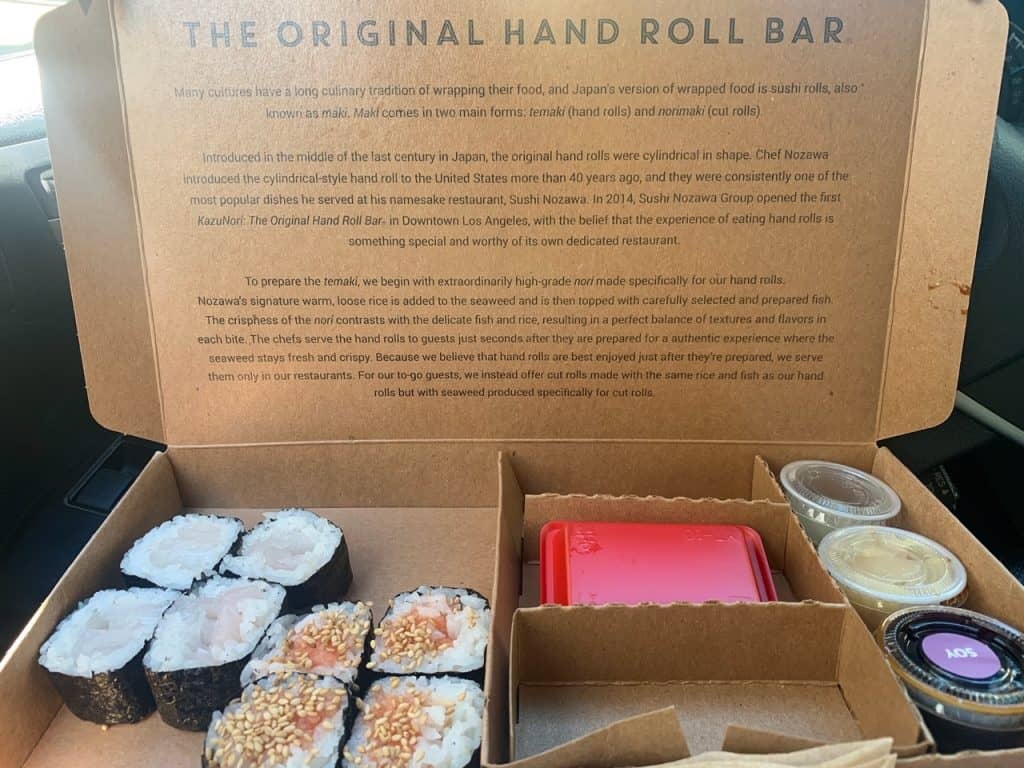 We picked up some raw fish along the way and enjoyed it.

By that point, it was time to head home.  For the direction we were going, we knew we needed to drive through Burbank on the way back.  So we stopped by Porto’s Bakery.

That proved to be a wonderful experience.  For one, they have these killer guava pastries.  I just couldn’t get enough of them!  They had a variety of other treats and sandwiches too.

But on top of that, their prices are ridiculously low.  I ordered four different pastries (hey, I was trying to make sure I’d have food for the long car ride home).  The cashier rung it up and told me the total was $5.69.  I asked if she had the right order because I was expecting it to be $15-$20.  She did indeed have the right order, and it knocked my socks off.

In these times of high inflation, it was such a breath of fresh air to be paying such low prices for such delicious treats.  And on top of that, she threw in an extra cookie without telling me!  I am now a lifelong fan of this place.

If I could do it again, I’d pick almost all the same things to do.  It was a memorable weekend for me.

We sampled some of the very best that L.A. has to offer, and it didn’t disappoint.  I’m already wondering when I’m going to head back, and I’m confident I’ll end up hitting some of these same spots again.

Brian Renfrow has more than 20 years of small business experience. He's been involved in entrepreneurial roles for more than 10 businesses since graduating from college with a degree in Economics.